I didn’t want to write this book.

I first heard Milly Zantow’s story in Sauk City, the small Wisconsin town where my sweetheart lives. Someone from the local historical society mentioned that the woman who invented the recycling symbol was from there.

A woman did that!

A woman from Sauk City!

I figured everyone else in town must know this astounding fact. But no.

I Googled her. I found a wonderful short video in which she explained how she kick-started plastics recycling in 1978, although the experts told her it couldn’t be done. I thought kids should know a woman did this.

I tried to get someone else to do it.

I ran into a Wisconsin publisher I knew and told her the story. “I don’t have an author to write it,” she said.

I couldn’t do it. I’m a fiction writer. And I write for adults and teens, not kids.

I talked about Milly to everyone I met, at dinners and parties and bookstores.

Everyone agreed it was an amazing story, but no one wanted to take it on.

Eventually I decided I’d better do it myself. I already knew the narrative; it would only take me a few months. Then I could get back to writing fiction.

It took me three years. (That’s what happens when a fiction writer veers off into the wilds of non-fiction.)

I wrote a draft, but there were a few pesky details to clarify. I didn’t know if Milly was alive. I couldn’t find an obituary, but I couldn’t find contact info, either. I spent a week hunched over microfilm at the library, reading back issues of our small-town paper, the Sauk Prairie Star. I found a letter from Milly thanking the public for their support of the International Crane Foundation. There was a letter from Vietnamese boat people thanking Milly and her husband for sponsoring them so they could leave their overcrowded Arkansas refugee camp for a new life in Wisconsin. I found articles about the landfill where Milly sat one day and watched the trucks dump garbage—“plastic, plastic, every kind of plastic.” My mental picture of Milly was getting richer, but my story was also getting more confusing.

“That’s what happens when a fiction writer veers off into the wilds of non-fiction.”

Some articles said the landfill was full; others claimed toxins were leaching into the water table. The woman from the historical society had said that Milly invented the triangular recycling symbol, but Wikipedia said it was a guy from California. In the videotaped interview, Milly mentioned putting the numbers 1-7 inside the triangles on plastic goods, but gave no specifics. Who thought of the idea?

I began to realize just how slippery facts were, and how the passage of time greased them further. People made mistakes, misunderstood things, left out the complicated parts. I’d written about this kind of thing in fiction, but it felt very different when I was trying to track down real facts and tell the real story of a real person—someone whose friends and neighbours might read it. I was used to being in control of the narrative (sort of). It’s so much easier to make stuff up!

“I began to realize just how slippery facts were, and how the passage of time greased them further.”

But research has its own satisfactions. I found someone who had worked with Milly thirty-five years ago, someone who knew that the landfill was leaching toxins and that it was too full. She also gave me a (totally unexpected and very useful) feminist perspective on the history of garbage and recycling.

I knew that if Milly were alive she’d be very elderly. I couldn’t wait any longer to find her. In April 2014 I flew to Wisconsin.

If necessary, I was prepared to cold-call all the Zantows in the phone book. But first I went to the local nursing home to visit a friend who was recuperating from a serious accident. Walking the corridor, I happened to glance over, and there I saw it: Mildred Zantow. I knocked, and she graciously invited me in to talk, even though she had just been given the news that her brain cancer had gotten worse.

I asked her my questions, but as she answered, I began to realize that the things that were important to her about her experiences were not necessarily the things I thought I needed to know for my account. Her story was not the same as my narrative.

“I knocked, and she graciously invited me in to talk, even though she had just been given the news that her brain cancer had gotten worse.”

The following year I had the privilege of interviewing two of Milly’s sons. I mentioned that I’d met her in the nursing home, and they asked me when. I told them, and there on the screened porch in Sauk, Jim and Todd looked at each other.

“That was probably her last lucid day,” Jim said. 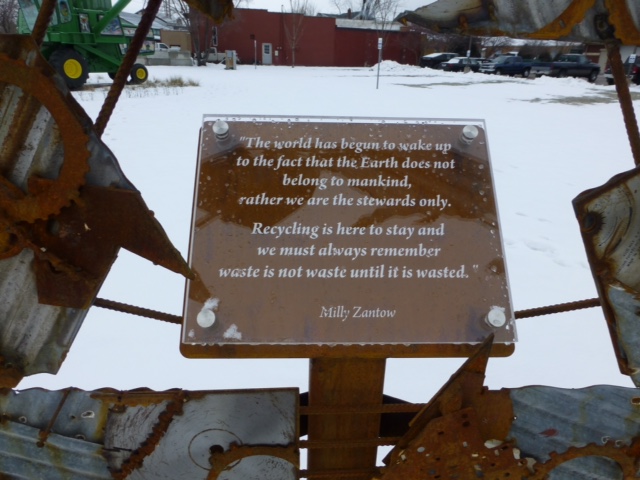 Since I started this book, things I’d confirmed have changed. In three years, technologies for recycling or replacing plastics have advanced. The environmental impact of plastic pollution has intensified, as has research on the subject. The information available on the history of recycling has improved; more than once during the process of editing I had to change wording or go back and re-research to be sure that what the book said was as true as we could know it to be.

Now that the book is printed, I’ve been telling people about it. The sporting goods manager at the local hardware store/agricultural machinery dealership, where there is a little book display next to the hunting supplies, remembers Milly. “Thank you for doing this,” he said.

Ironically, it’s easier to write fiction that is true, and that will always be true, than it is to write non-fiction. Fiction only has to express a truth; it can do that by any means, whereas non-fiction is expected to tell the literal, verifiable truth about the material world, and as we all know, there is nothing constant in the material world but change.

Another thing that’s changed: I’m so glad I wrote this book!

Elise Moser is the happy author of What Milly Did: The Remarkable Pioneer of Plastics Recycling (2016), Lily and Taylor (2013), both from Groundwood Books, and Because I Have Loved and Hidden It (2009), published by Cormorant Books. She has published short stories, edited anthologies, and led short story workshops and mentored for the QWF. She serves on the board of PEN Canada and is an associate editor with Linda Leith Publishing.

Photo credits: Fred Lauing (headshot; photo of Elise Moser next to the Milly memorial), Elise Moser (the other two)